For a printable version of the game instructions that come with the purchased Twisticon! game, click on this link.

Twisticon! is all about creating sets of three matching icons. Players take turns twisting the cube, with the goal of creating “three-in-a row” groups of similar icons on the top of the cube. A “3-in-a-row” set on the cube allows players to collect all visible matching cards. When players have collected three cards with the same icon, they may turn that set face down; that card set is “closed” and cannot be taken by another player. To win the game, collect the most card sets, or a set of all nine matching cards.

One player acts as the dealer during the game. The dealer shuffles the deck of cards and, starting with the person to the left and continuing clockwise, deals one card at a time until each player has three cards. These cards remain face up for everyone to see. This is called the player’s “hand”.

The dealer then shuffles the cube by twisting it thoroughly — without looking. The cube is placed in the center of the table so everyone can see it. The player to the left of the dealer takes the first turn. Note: Though illustration below shows a 2-person game, Twisticon can be played with up to 4 players. 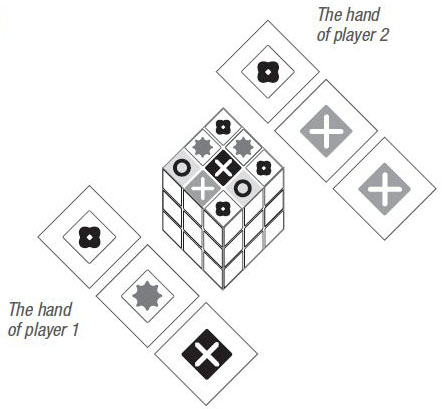 On each turn, players try to create a 3-in-a-row set on the top of the cube—either vertically, horizontally, or diagonally. The icon in the achieved set must match an icon on one of the three cards in the player’s hand. (See reverse about how to create sets.) If a set is created, the player takes any face-up cards on the table with thatmatching icon.  This includes cards from the player’s own hand, opponents’ hands, or any cards that have been won during play, but are not in closed sets of 3 or more (see snapshotof a game). If the three cards in a player’s hand have matching icons, they can be closed as a set, and the player receives three new cards from the dealer.

BONUS ! - When a player creates a three-of-a-kind  set, there may be additional matching icons on the top face of the cube. Player wins one additional card from the deck for each extra icon.

snapshot of a game

In the turn shown here, player 1 has just achieved a three-in-a-row set on the cube that matches on of the cards in his hand, and is permitted to collect ANY cards of that symbol—from his own hand, the hand of Player 2, or from Player 2’s open cards.

how to create sets on the cube…

During a turn, players are allowed to examine the top and sides of cube, but may not lift the cube from the table before making their move. There are 3 allowable ways to achieve a three-in-a-row set on the cube:

twist or flip the cube

offense – While taking your turn, be aware of the cards in your opponents’ hands, as well as those that are still vulnerable (i.e., not in “closed” sets.) You may have a choice about which sets to play for.

defense – If you don’t think you can create a set during your turn, make sure that you are not setting up your opponents to create one on their turns, especially the player to your left. You may make a move that doesn’t help you, but does make it harder for the other players.

Game continues until at least one player no longer has cards in their hand (ie, they are “out”) and there remain no new cards to deal. At this point, players count their sets to determine their final score.

The player with the most points wins. In the case of a tie, count the cards you have won that have not been placed in a set and assign them 1 point each.

INSTANT WIN! – Remember, if any player is able to collect all 9 cards of any matching icon, they win the game instantly!  This can happen at any time during the game. Player MUST declare the set of nine cards for the win.

ready for the next level of play? 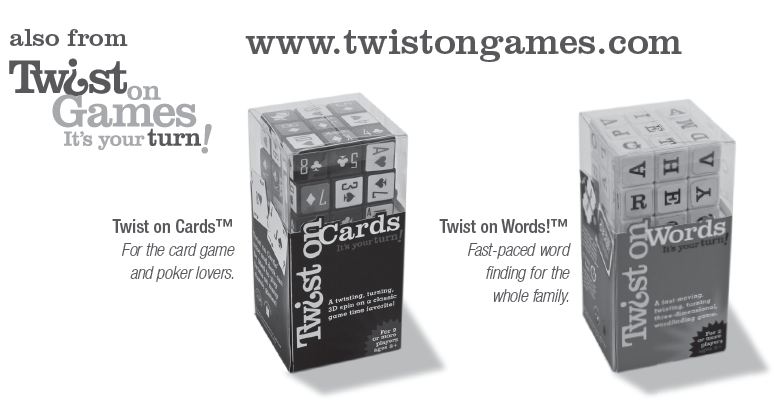 No Comments » for Twisticon Rules